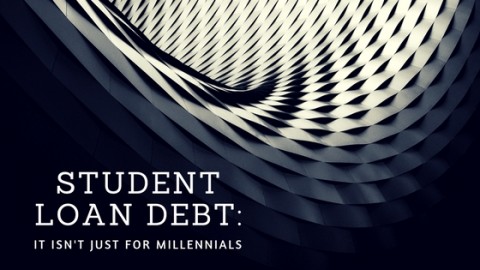 It's no secret that today's college graduates face record amounts of debt.  Approximately 68% of the graduating class of 2015 had student loan debt, with an average debt of $30,100 per borrower -- a 4% increase from 2014 graduates.1

A student loan debt clock at finaid.org estimates current outstanding student loan debt -- including both federal and private student loans -- at over $1.4 trillion.  But it's not just millennials who are racking up this debt.  According to the Consumer Financial Protection Bureau (CFPB), although most student loan borrowers are young adults between the ages of 18 and 39, consumers age 60 and older are the fastest-growing segment of the student loan market.2

The reason for this trend is twofold: Borrowers are carrying their own student loan debt later in life (27% of cases), and they are taking out loans to finance their children's and grandchildren's college education (73% of cases), either directly or by co-signing a loan with the student as the primary borrower.4  Under the federal government's Direct Stafford Loan program, the maximum amount that undergraduate students can borrow over four years is $27,000 -- an amount that is often inadequate to meet the full cost of college.  This limit causes many parents to turn to private student loans, which generally require a co-signer or co-borrower, who is then held responsible for repaying the loan along with the student, who is the primary borrower.  The CFPB estimates that 57% of all individuals who are co-signers are age 55 and older.5

The increasing student loan debt burden of older Americans has serious implications for their financial security.  In 2015, 37% of federal student loan borrowers age 65 and older were in default on their loans.6  Unfortunately for these individuals, federal student loans generally cannot be discharged in bankruptcy, and Uncle Sam can and will get its money -- the government is authorized to withhold a portion of a borrower's tax refund or Social Security benefits to collect on the debt.  (By contrast, private student loan lenders cannot intercept tax refunds or Social Security benefits to collect any amounts owed to them.)

The CFPB also found that older Americans with student loans (federal or private) have saved less for retirement and often forgo necessary medical care at a higher rate than individuals without student loans.7  It all adds up to a tough situation for older Americans, whose income stream is typically ramping down, not up, unlike their younger counterparts.

Think before you borrow

Since the majority of older Americans are incurring student loan debt to finance a child's or grandchild's college education, how much is too much to borrow?  It's different for every family, but one general guideline is that a student's overall debt shouldn't be more than his or her projected annual starting salary, which in turn often depends on the student's major and job prospects.  But this is just a guideline.  Many variables can impact a borrower's ability to pay back loans, and many families have been burned by borrowing amounts that may have seemed reasonable at first glance but now, in reality, are not.

A recent survey found that 57% of millennials regret how much they borrowed for college.8  This doesn't mean they regretted going to college or borrowing at all, but it suggests that it would be wise to carefully consider the amount of any loans you or your child take out for college.  Establish a conservative borrowing amount, and then try to borrow even less.

If the numbers don't add up, students can reduce the cost of college by choosing a less expensive school, living at home or becoming a resident assistant (RA) to save on room costs, or graduating in three years instead of four.

Contact a Financial Advisor at Hummel Group for more guidance or set up an appointment.

To the extent that this material concerns tax matters, it is not intended or written to be used, and cannot be used, by a taxpayer for the purpose of avoiding penalties that may be imposed by law. Each taxpayer should seek independent advice from a tax professional based on his or her individual circumstances.

These materials are provided for general information and educational purposes based upon publicly available information from sources believed to be reliable—we cannot assure the accuracy or completeness of these materials. The information in these materials may change at any time and without notice.
Prepared by Broadridge Investor Communication Solutions, Inc. Copyright 2017.